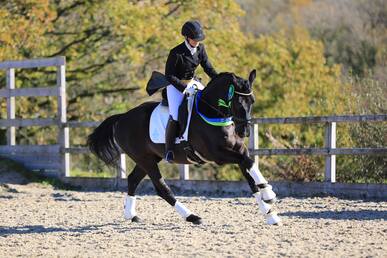 Having ridden from an early age, Ali was a consistent Petersfield Pony Club team member, competing successfully in dressage, showjumping and eventing. Extensive experience in many different disciplines, ranging from backing and breaking polo ponies in Barbados, to grooming at top shows/ competitions led to an interest in a career with horses. After training with top class eventers, Ali decided to supplement her equestrian knowledge with a Business Management degree at the University of Brighton.
Having competed together up to CIC2*, Ali is now campaigning her talented but 'quirky' TBxWB, Morris at Inter 1 and her sister's horse, Rudi (aka Supporter Z) at Elementary, alongside a few youngsters and other horses brought to her to train and compete in both eventing and dressage. Ali trains with event rider Bruce Haskell and for dressage, with Adam Kemp and Liz Diegutis. After wide-ranging experience in riding schools, on event yards and freelance, Ali has built up a firm reputation as a knowledgeable and sympathetic rider and trainer. Fully insured, with first aid, Child Protection and CRB certificates, Ali also regularly attends CPD with both British Dressage and The Pony Club.
Jack Loder - Groom
Jack joined HDE in January 2022, having achieved a distinction in his Level 3 Grooms Apprenticeship at North Farm Stud.  Alongside helping to run the yard, Jack is currently competing his horse, Wallace, at BD Novice level, aiming for the Area Festival Championships.  Despite only just recently embarking on their BD career, Jack and Wallace are already posting high scores and will hopefully be competing at Elementary by the end of the year.  One of Jack's professional aims over the next few years is to complete his BDCC coaching qualifications.
Lorna Moore - Secretary
Lorna looks after all the paperwork, organises staff rotas, clinics, lessons and keeps Team HDE on the straight and narrow!  All lesson bookings, livery and clinic enquires come through Lorna.
Powered by